In Episode 69 of Painting Pictures, Gabe is joined from Scotland by Evil Gabe, aka Gabriel Q Vest, to talk about the origin of Evil Gabe, Paonia CO, and life in Scotland.

Here’s a permalink to the episode:
http://gaberobertsart.com/podcast/?name=2020-01-27_good_gabe_vs_evil_gabe.mp3

Please leave your comments below.

Driving up to the Land

We met upstairs at the old apartment building-turned-art-gallery where we rented office space. It had high ceilings and wood trim around all the doorways, with etched-glass windows above each door, creaky wood floors throughout, and a piano in the grand front room that overlooked the town’s main drag below.

Chris was playing piano when Ryan arrived and we waited for him to finish his song, or to finish his need to play some piano. He played “It’s All Understood” by Jack Johnson and the big chords echoed throughout the hall. Ryan and I sat across from each other on a couch and chair in the sitting room, smiling about Chris on the piano and rolling a spliff. The girls were occupied together with something and so it was suddenly just us three guys and we were going up to the land. I was somewhat anxious to leave, as the night was getting on, but made an effort to quiet myself and wait and after a few more trips through the chord progression Chris was done and standing tall and ready to go.

I drove the Subaru out of town and put some music on, and on the short ride down the highway we lit up the spliff and then I turned off onto the dirt road that climbed up to the land. We hadn’t been up in a few days, and not together in a long time. We said something about the girls and laughed and the Subaru climbed and I tried to avoid the rocks in the road. It was quite muddy, and when we got to the steepest stretch I didn’t give it enough gas to get up, and feeling the car start to slip, I put it in reverse to back down the hill to stop on the flat spot. I was stressed about the car and especially the mud, having smelled the engine always after making the drive up, and, despite having owned the car for two years and driven it across the country, unsure about the little car and how it was doing. All the way back down the hill I stopped the car and Chris opened his door and got out and yelled “Holy shit Gabe!!”, and Ryan got out of the back seat and exclaimed “OH HO!! MAN!!” and I yelled “What?!?” and Chris said “You almost backed off the edge!”. “Your back wheel is hanging over the edge!” said Ryan. My heart was pounding and I pressed the brake as far to the floor as it would go and pulled the handbrake as Ryan and Chris walked around and laughed. “Yeah your whole back right wheel is off the edge!” said Chris, and they both laughed.

I wanted to get out and Chris told me to put the car in gear and I dumbly said “what gear?” and he said “any gear, so that we don’t roll off the cliff”, and reached inside from the passenger window and pushed the stick into first. I said something about the smell coming from the engine, convinced in my spliff-blasted brain that there was something terribly wrong with the car, and I popped the hood and Chris peered inside and I slowly got out of the car and walked around to see the wheel hanging over the edge of the road and the darkness below of the drop we’d nearly taken.

“Oh God” I said, and walked around to the front, feeling sick and already swearing that I’d never again drive stoned, and Chris determined that everything looked okay under the hood and Ryan put down the hood prop rod and was fumbling looking for its seat in front of the engine, and I could see he was struggling with it but after being in charge of driving and getting us nearly killed, I’d lost all assertiveness and numbly stood and watched until he asked “could you come help me with this?”, and then walked up and put the prop in its half-broken little plastic clip and closed the hood. Chris offered to drive and I immediately agreed and asked “how confident are you that you can drive the car out of this?”, and he said “about 99%”, and got in and Ryan and I came around back and got purchase as best we could over the edge of the road, our chests up by the back bumper, and Chris revved the engine higher than I’d ever heard it go, and we pushed on the bumper and then Chris dropped the clutch and the Subaru jumped forward and scooted away up the road. Ryan and I climbed over the edge back to the road and walked up as Chris stopped the car and then gradually reversed back to us. We decided to leave the car there at the base of the hill and Ryan and I walked back a bit to find a good spot to park and we walked from there, carrying a few snacks and sweaters up the muddy hill and onward in the night all the way up to the land.

They were both in good spirits but I still felt sick inside and thought about how I almost got us all killed and I said “I’m sorry guys” and they said don’t worry about it and Chris said “hey at least you stopped when you did!”. We walked three-across up the hill and they made more jokes and already the whole thing was something funny that had happened to the three of us. It was never something that I had done: it was something that happened and we were all in it together. When we reached the big blue and yellow bus we said hi to the little meowing black cat and bedded down straight away and slept through the night, and in the morning we walked back down the hill in the mist, Chris wearing an old wool jacket that he had once loaned to Ryan but who never wore it. The jacket later passed to me and I still have it today. 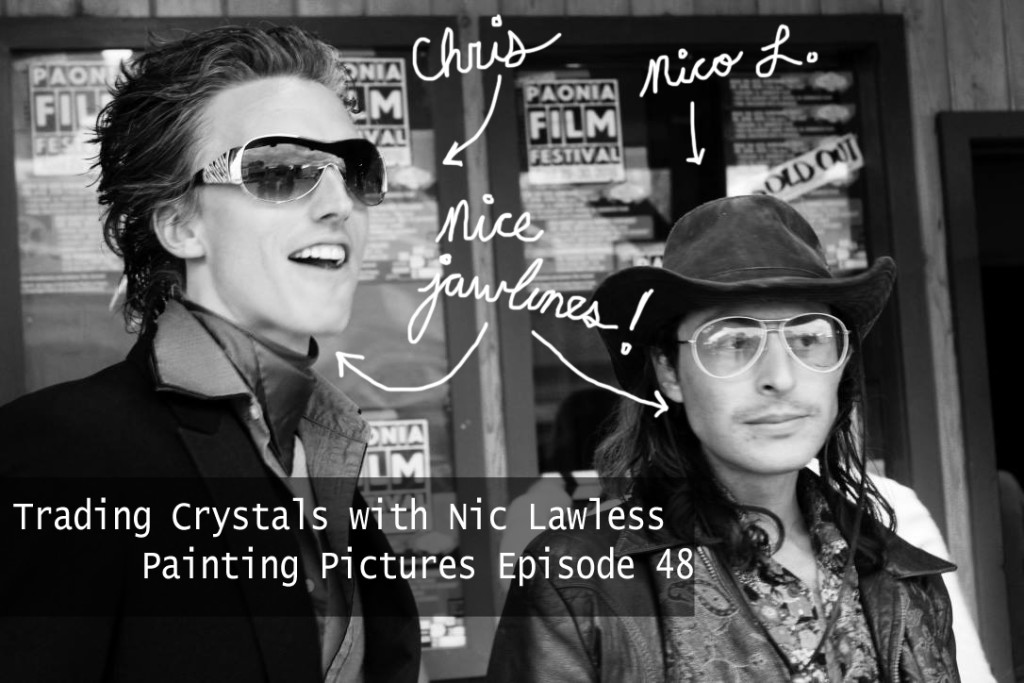 Here’s a permalink to the episode:
http://gaberobertsart.com/podcast/?name=2016-05-26_trading_crystals_with_nic_lawless.mp3

Here are a couple of links to Nic Lawless music: 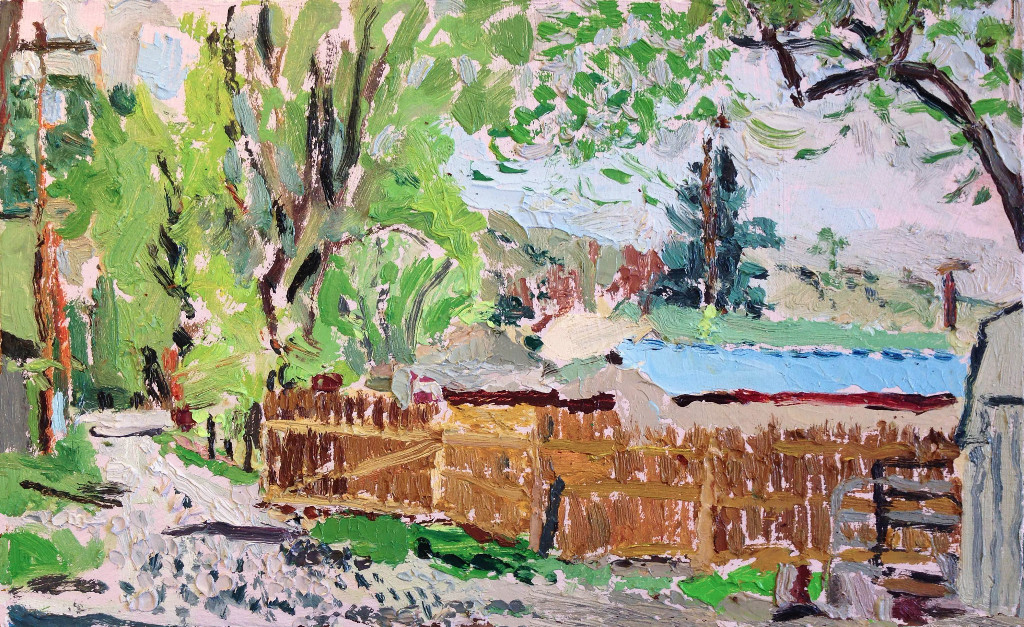 The small painting “Main Alley (windy day)” will be on display in Paonia, Colorado at Wisehart Springs Inn this Saturday during the 2nd annual Elsewhere Studios Masquerade Ball.  Along with a number of other paintings by local Paonia artists, “Main Alley” will be auctioned off to support the North Fork Community-Supported Art Library.

This painting is on Rives BFK printmaking paper and measures 6.5×11 inches.  Here are some pictures of it all framed up in recycled redwood: 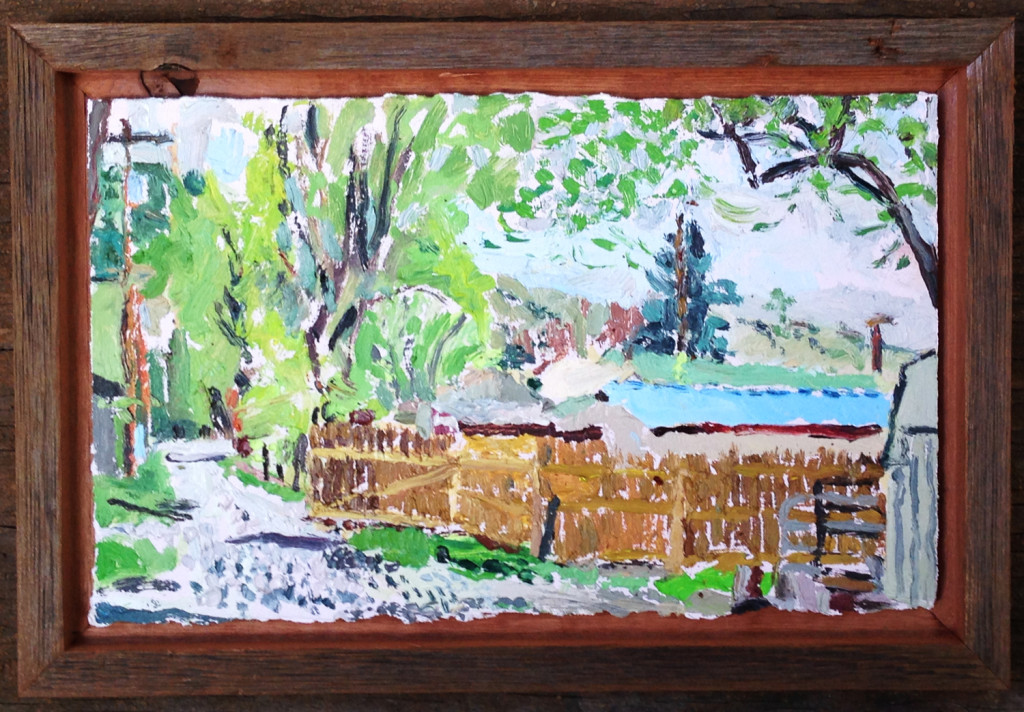 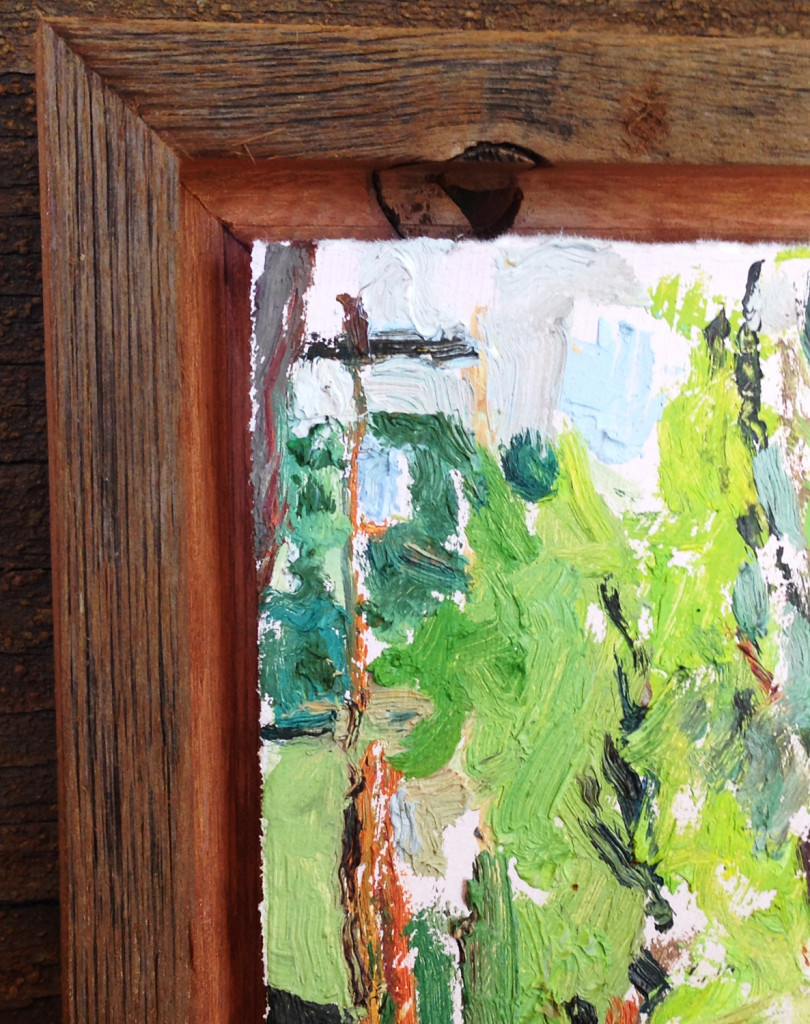 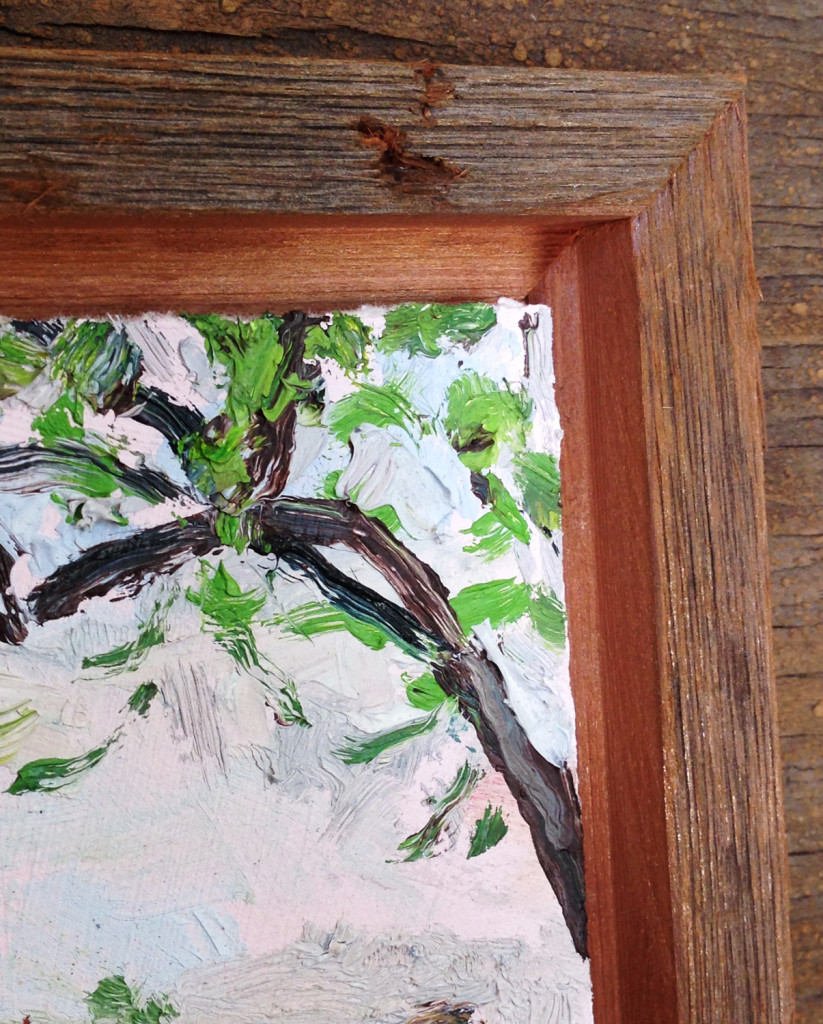 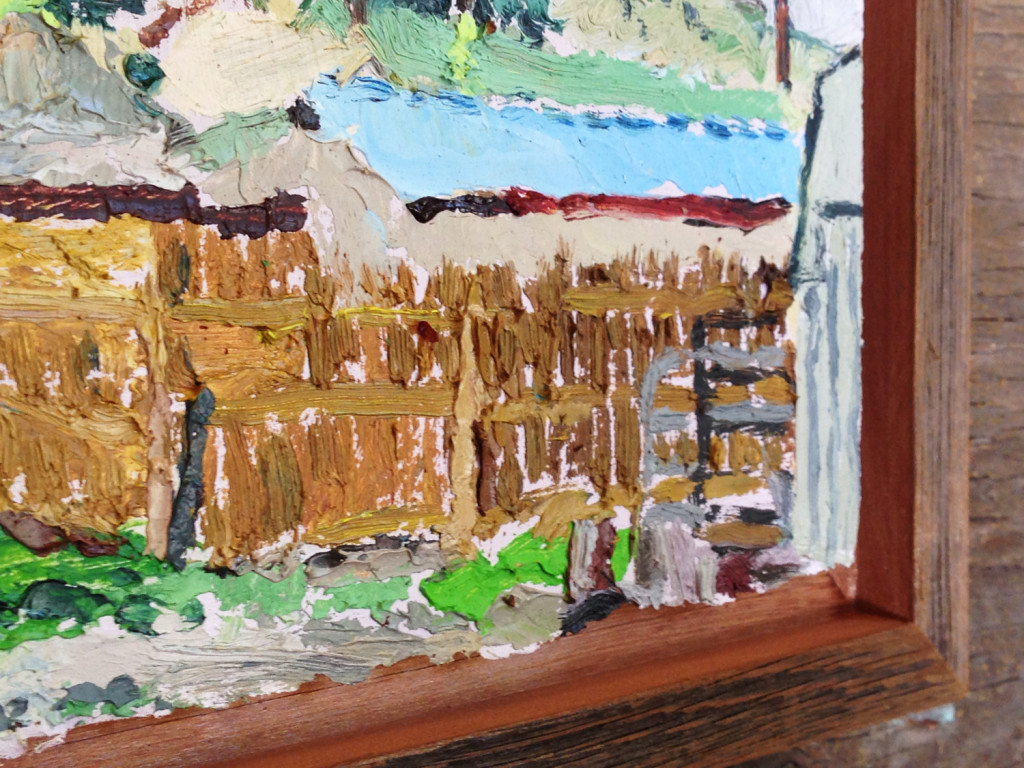 Sadly, I won’t be attending the ball this year, but I’m glad that my painting will!